The Growth Rate Of China’s Steel Production Continues To Fall

CCTV News: China Iron and Steel Association announced on October 25 the economic operation data of the steel industry in the first three quarters.

Data shows that in the first nine months of this year, steel demand has been steadily declining, and the growth rate of steel production has continued to fall.

From January to September this year, the national crude steel output growth rate dropped by 2.5% compared with the same period last year.

Among them, in September, the national daily output of crude steel was 2.4583 million tons, a year-on-year decrease of 21.2%, which was the lowest value in the past three years. The effect of the national production restriction policy has appeared.

In addition, due to the global economic recovery, China’s steel exports have increased. From January to September this year, national steel exports increased by 31.3% year-on-year.

The China Iron and Steel Association stated that the export volume of steel has dropped from the highest 8 million tons in April to less than 5 million tons in September. The effect of national regulation is obvious, and steel prices will not fluctuate sharply.

According to reports, in the first nine months of this year, iron and steel companies continued to tap their potential, their economic efficiency improved significantly, and the asset-liability structure was further optimized.

From January to September, the operating income of China’s large and medium-sized steel companies increased by 42.52% year-on-year, and the average sales profit rate was 6.03%, an increase of 2.18 percentage points year-on-year. 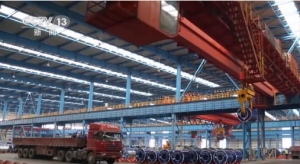